My Christmas Day tweet was used in an online news article about the Queen's health.

It's true that Her Majesty and I were both too sick to attend church, to my chagrin. The chills started Wednesday night and I spent the first day of Christmas vacation sleeping the day away, trying to recover. I was marginally well enough later on to drag myself and my family over to my parents' house for our traditional Christmas Day dinner.

As an adult, presents aren't the most important part of the celebration; yet, there was one gift this year that bowled some of us over completely. It was the last parcel unwrapped and was from my sister, who lives in Calgary. I wasn't sure what it would be, because she had already shipped presents to my house beforehand.

It was a pair of books.
Comic books.
Made by my sister.
About some true events from the past.

My brother and I lost it. We laughed so hard, we cried. We couldn't speak. We pored over each page. We were flabbergasted. We were blown away. With this present, my sister "won" Christmas. 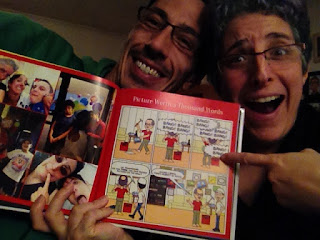 No one else in the room had quite the same, extreme reaction that my brother and I did. They thought it was "nice". I think this speaks to the sibling bond of shared experiences. My sister took a few literary liberties for greater impact, but the funniest pages and panels were hilarious because they were so true - and here it was, saved for posterity, in comic form.

After a flurry of texts exalting her amazing gift, we discovered that there were actually more comics that she had created using Bitstrips, but when the site closed, she was unable to access or upload her work.

Those who follow me on Twitter know that I loved Bitstrips and the educational counterpart, Bitstrips for Schools. A long time ago, my school even appeared in a news segment on how we used technology, specifically Bitstrips, in our learning. (Go to http://mzmollytlsharespace.pbworks.com/w/page/36759265/Praise-and-Public-Relations and scroll down to the bottom to see the video clip.) I was really upset when Bitstrips was purchased by SnapChat and stopped operations. On the school side, we received this note back in the summer.


Sadly, the virtual doors shut prior to August 31 and I didn't archive all the materials we had on there. It sounds like the public side was equally dismayed about the end of this fabulous tool. 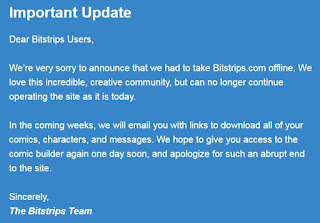 I doubt that Jacob Blackstock, the CEO and founder of Bitstrips, reads my blog. What I'm hoping for is that the promised "links to download all of your comics, characters and messages" will come through, so that I can actually read and experience more of the incredible comics documenting my family stories.

Comics are powerful creative outlets. This message was reinforced this year by this present from my sister and with my participation in TVOntario's Teach Ontario course, "Panels, Gutters and Bubbles: An Introduction to Comics for Educators". The learning will continue in the new year with the book club devoted to the graphic novel Secret Path by Gord Downie and Jeff Lemire. Participants can register for the free club at www.teachontario.ca What sadly won't continue is the first kids only comic book store in North America. Little Island Comics will be closing its doors on December 30, 2016. The staff and support will continue to exist as part of The Beguiling, but it will no longer have an exclusive space. Andrew Woodrow-Butcher and his staff were (and still are) a vital part of my comic knowledge building circle. I would not have been able to recommend such current and marvelous comics for that Teach Ontario course without his guidance and generosity. I was shocked to hear from Andrew (and other vendors) how some shoppers would pick their brains, only to then turn around and purchase from another distributor or vendor because their prices were lower. This is why independent sellers struggle to stay afloat. If you get a chance in the next few days, pop by Little Island Comics and buy a book. After all, it can be the best gift.

Posted by MZMollyTL at 9:08 AM