Oops I Did It Again

Today's click-bait-worthy title refers to my return to Montreal for a wonderful conference - but it's so much more. In late March I was in Quebec for the QSLiN conference. May 4, 2017 was the wonderful ABQLA (l'Association des bibliothecaires due Quebec / Quebec Library Association) 85th annual conference. Here are a few photos I took while I was in town for ABQLA: 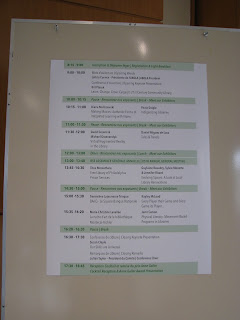 and here's some of my workshop participants during the "Milling to Music" section of my talk ... 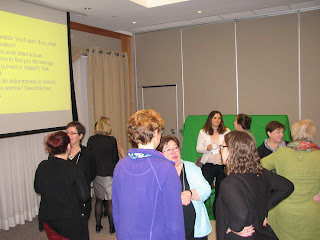 and here I am showing some folks how to use DoInk on the iPad to do "green screen filming" ... 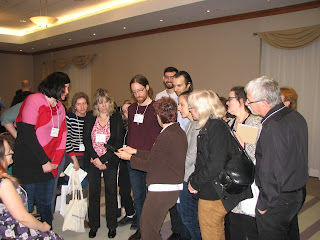 and here I am wearing a hospital gown in the Emergency department ... 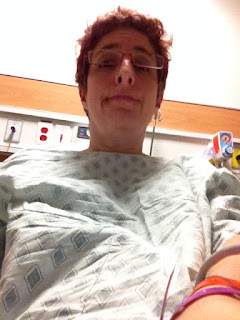 Wait a second, you may be wondering - how did I get from the Gelber Conference Centre to the Jewish General Hospital? It's not that far, actually. It's only a three minute taxi drive, thank goodness. Sarcasm aside, I've taken a similar journey before, thanks to my anaphylaxis (aka my peanut and pine nut allergy).

This is what happened, in a nutshell (pardon the pun): at the ABQLA conference, they had a wonderful buffet lunch set up. I ate many wonderful things, including something not-so-wonderful - s pasta that had sauce that used pesto. I had about 2-4 noodles and stopped eating them quickly after that because it didn't taste good (and I had yummier things on my plate). My lip began to swell and then my throat started to feel funny. I checked with the conference site manager and sure enough, he confirmed that the pasta contained pesto. Pesto is made from pine nuts. Allergic reaction in process.

I've been to the hospital thanks to my allergies twice before - in 2015 with my good friend (and fellow teacher-librarian) Francis Ngo, and many years earlier where my good friend (and also teacher-librarian at the time) Peggy Thomas saved me. (This confirms that teacher-librarians are heroes.) You'd think that by now I'd be an expert on what exactly to do in this circumstance. After all, as teachers, we take the training every year on how to deal with using Epi-pens and life-threatening allergies. Yet, I was quite foolish. Here are several things that I did wrong. Don't do what I did!

1) I didn't inform my dining companions that I was having an anaphylaxic attack.

The irony of this action is heavy - we had just been talking about food allergies and one of my companions was being extra careful because she has a nut and soy allergy. Why didn't I tell anyone? The excuses are rather trivial - I didn't want to alarm anyone. I didn't want to make a fuss or ruin anyone's lunch. I didn't know people well and I didn't want to inconvenience them. Doesn't that sound ridiculous when it's written out like this? Yet, one of my fellow teachers (Kerri Commisso) said she's heard of people who are choking do the very same thing I did - slip out quietly to try and deal with the problem themselves. It was May 4 - my Star Wars lesson should have been not to go Solo!

2) I went by myself to the hospital and only told one person I was going.

It was only a short distance away, but I was in a different city far from home. What might have happened if I had collapsed en route to the emergency department? Silly me - I was quite confident that I had twenty minutes before my throat would close up, because that's what occurred the last two times I had a serious reaction. Because of this "I have time" attitude, I made a third error.

3) I did not give myself the epinephrine shot.

I've never stabbed myself. I tried the first time I had a severe reaction, but I was too weak from lack of oxygen so Peggy did it. The second time, Francis did it. This time, I waited. I felt like I had time and, to be honest, I didn't have the courage to inject myself. (Remember in an earlier post, I said I have a fear of needles?) I also knew that after having an epi-pen shot, medical personnel will keep you in the hospital for observation for four hours. I felt, with a terribly skewed sense of priorities, that I didn't want to have to wait that long. I had planned on driving back to Toronto right after lunch. I never considered that if I waited too long that I might not be in a condition to drive - period. The emergency room doctor told me that I should not wait to give myself the needle. I was more annoyed at myself than scared during this ordeal, but the one moment that did frighten me was when I was being seen by the triage reception person and I realized that twenty minutes had passed since I first ate the contaminated food. I thought to myself that this is the part when my throat will close up, just like the other times, and I haven't taken action yet. I spoke to the person checking me and he reassured me that if he saw that I needed it, he'd stab me himself. He said that they'd treat the reaction in a slightly different way and they did - I had an intravenous of Benedryl. I had to be kept under observation for two hours to see if I was okay.

Once I was feeling more stable, I texted my friend in Toronto. Poor Julian Taylor, the ABQLA conference coordinator, sent me some worried texts and emails, because he had heard second hand that I was in hospital. (Sorry Julian!) I waited until I was out of the hospital before calling my husband. Despite offers of extra hotel nights and supply teacher coverage, I just wanted to go home, so I drove myself back to Toronto (in the rain, in the dark, by myself - I'm stubborn and not always smart).

I need to learn from my mistakes. I really need to be more careful with what I eat (and avoid foods that might contain pine nuts and peanuts). I need to be brave and give myself a shot without angst or hesitation. I need to throw concerns about social niceties out the window and tell people (even strangers) when I might be in trouble. It could be a matter of life or death.

P.S. It's not all about me. Check the #abqla17 Twitter feed for some highlights from the day.