Teaser trailers can be misleading. On Friday, October 9, 2020, I wrote the following tweet:

So I cried at school on Monday and I cried again at school on Friday. Different reasons; apologies to my in-person colleagues who were worried/alarmed at 1st. (Consider this a "teaser trailer" for this Monday's blog post.)

The reasons for both sets of outbursts were related but not identical.

On Monday October 5, 2020 our group of in-person teachers were told that our school was indeed going to have to reorganize, but not in the way we expected. A teacher was removed from the roster and placed for duty in virtual school, but our school board indicated that the cut had to be applied to the junior-intermediate division. This meant that I would probably teach a much-larger Grade 4-5-6 class. My colleague, Farah Wadia, (who was slated to teach a Grade 6-7-8 class) and I were devastated. I wept because I was terrified - how on earth would I be expected to teach 3 separate grades simultaneously? I know it's been done before - my friend Denise Colby is proof of that - but with very little experience as a classroom teacher, I had no idea how I would manage.

Thankfully, we were allowed to reorganize in a much more manageable way and now our six classes (JK-SK, 1-2, 2-3, 4-5, 6-7 and 7-8) have become five (JK-SK, 1-2, 3-4, 5-6 and 7-8). This meant that I would still have to make a shift. I would pass my five Grade 7s to the Grade 7-8 class and accept ten Grade 5 students into my class. I informed my Grade 7s about the change earlier than I was supposed to, but I wanted them to be notified with enough time to adjust to the idea. They had mixed feelings about the news. They were happy that they'd be reunited with their fellow Grade 7 students - originally we were in separate cohorts and they weren't even able to congregate at recess - but they were disappointed that they couldn't remain in Room 206.

On Friday, the Grade 7s asked if they could stay in at recess because they had something to show me. I agreed because I knew I had a prep afterwards and I could use the time to continue transforming the class space, creating IEPs, and other necessary jobs. I had no clue what to expect, which is why I think I had the extreme emotional reaction I had.

The Grade 7s had prepared a slide deck for me. I will only share their "rationale" screen here. 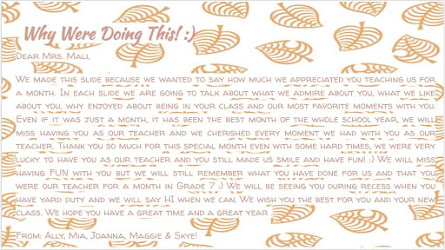 I am not ashamed to admit that I broke down and had to leave the room three times as they tried to show me their tribute. Eventually, I had to call the office to arrange to have someone supervise the Grade 7s so that I could try and regain some composure. I think I may have frightened them. Heck, when I saw myself in the mirror in the bathroom, I scared myself! Seriously, I was so taken aback at my red-eyed, distraught appearance that I took a photo. 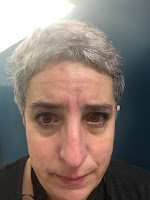 I knew that I worked with extremely appreciative students - I wrote about this only a couple of weeks ago - but this was completely unexpected. This is what makes all the late nights planning and marking worthwhile.

In some ways, this new assignment will be easier - Grade 5 & 6 are both in the same division; the math will be easier for me to understand and teach; the students that I'm inheriting are wonderful individuals that are looking forward to spending time with me. This information doesn't make the change easier, especially for me and the Grade 7s.

The sad part is that I had nothing but my profuse tears to give them as a thank you for their efforts. Therefore, the rest of this blog will enumerate seven (of the many) reasons why I will miss having this group of Grade 7 learners with me.

1) These Grade 7s were hard workers that were keen to improve.

I never had enough homework for these students! My husband once commented "What kind of kids beg for homework?". These students really relished any tasks that they were given. They asked for feedback and applied the feedback to their assignments. They were willing to revise and revamp their work and not just because it would result in higher marks.

2) These Grade 7s were mature but still playful.

When I revealed to the students about the reorganization plans, I told them that it wasn't a secret but that I'd prefer if they didn't share the news to the rest of the school quite yet. They said they wouldn't, and they were true to their word. I loved that we could have serious talks about harassment and racism but we could also be silly. Many of them mentioned the buzzers that they were provided so that, if I was preoccupied with my larger and needier Grade 6 group, they could get my attention. These Grade 7s never abused the privilege but there were unexpected honks that made us giggle. Their science challenge in Minecraft (to collect examples of biotic and abiotic elements in a Minecraft world) led to some amusing moments.

3) These Grade 7s were independent.

Outnumbered 14 to 5, the Grade 7s often had to do their own thing while I assisted others. This was not a problem. Mrs. Whitmore, our supply teacher (in for French recently) called them "angels". No teacher has to hover over them to ensure they are on-task. If they finished early, they found ways to occupy themselves without disrupting the rest of the group.

4) These Grade 7s were team players.

Their favourite type of activity involved them collaborating as a team of five to complete projects. They investigated the best way to refill water bottles safely in school and designed a poster to teach the younger students what to do. (While doing this, they even recorded their plans, so writing their learning skills portion of their report cards will be a breeze, because they provided plenty of evidence of their initiative, collaboration, responsibility, organization and independent work.) Everyone played a part and was involved. As part of their data unit, they surveyed the in-school staff about their beverage preferences and created charts and graphs. 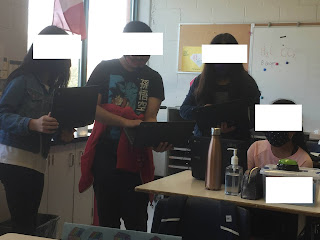 5) These Grade 7s were leaders engaged with their learning.

I had some wonderful role models to use for lessons. In gym, they demonstrated to the Grade 6s how it would be possible to roll a marble through a series of tubes. (I borrowed this idea from my time at Albion Hills with the Grade 8s.) In whole class discussions, I could always count on one of the Grade 7 students to offer an idea or suggestion or answer. They participated with pleasure. When I had no clue why they were unable to join a joint Minecraft world in Minecraft Education Edition, they took it upon themselves to read forums and FAQs to try and determine why it refused to function. 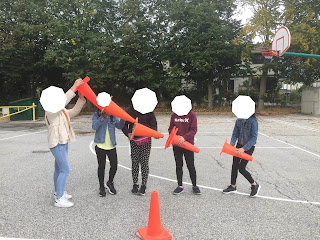 6) These Grade 7s were hilarious.

Some of the comments and conversations we shared made me laugh. I wish I recorded some of the utterances they made while working on their Minecraft projects - things like "I killed the pig - does that make it abiotic now?"

7) These Grade 7s were kind to everyone.

Despite being a close-knit group, the Grade 7s included the Grade 6s when they were involved in small group tasks. They made a point of going on our Google Classroom (and sending the Grade 6s emails) to thank them for their time together as a group.

Monday's tears were tears of frustration and fear. Friday's tears were due to shock and surprise of a sort that was positive. I hope (in vain, unfortunately) that there were be no more major changes to our class structures. We bonded, even in this brief time. Bean-counters don't understand how broken-hearted everyone can me when classes are dismantled and reassembled. On this Thanksgiving weekend, I am grateful to have had these wonderful students, if only for a month.