Where did the time go? I meant to make many posts about the Educational Computing Organization of Ontario's annual conference and school life has swept me away like a tsunami. I really appreciated Doug Peterson's blog post with a list of many blogger thoughts on #ecoo11 and it inspired me to come back to the waterhole for another drink from the ECOO well. (What's with all the wet references? I must be thirsty!) 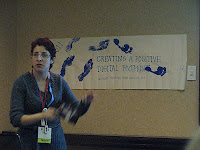 I brought my camera to take some photos but I was usually so busy listening or learning that I didn't take many. My friend Alanna King took some photos during my Thursday presentation on positive digital identity. She went wild with the camera. There are plenty of close-ups of me making faces as I spoke. I'm glad she got one of the paper I re-used as a poster advertising my session - that took a dreadfully long time to create, if you recall my post from last week on the subject. 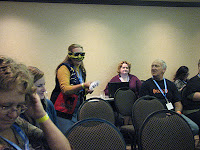 At the beginning of my talk, the #ecoopenguin kidnapper made an appearance! This was pre-arranged via email by Cal, one of the ECOO conference organizers (although I actually - and ironically - did not have time to check my email during the conference). The Rumplestilsken-like game to rescue the penguin by deciphering his name was a fun activity. I didn't participate but many people did and they enjoyed it. ECOO conference prizes can't be beat!

I did manage to take photos of my children presenting at our Friday morning session - the grandparents love seeing shots like this, and it's good for my own children's positive digital footprints! This is a photo of Peter, my son, running the quiz game with six very patient and kind volunteers. Give a nine-year old power and knowledge above adults (and educators to boot) and you can imagine the thrill he had.

My daughter Mary has presented with me quite often, at the Ontario Library Association Super Conference and at more local, smaller affairs. She taught some people how to play the board game Labyrinth and everyone at the table looked like they were involved and engaged. My kids were scheduled to leave at noon on the dot and my parents drove to pick them up but Grandma and Pop Pop waited patiently outside the room because they didn't want to interrupt Mary's game. 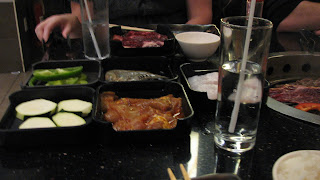 I've said it often enough but it bears repeating - I learn just as much outside the sessions as I do in the workshops. In some instances, I may learn more through the informal learning. I was really delighted to meet some new people. We "clicked" and they deserve a "shout-out" as well. (Above is a photo of my first Korean BBQ restaurant experience, which I'll explain further below.)

royanlee Royan Lee
Royan is with the York Region District School Board (and is a former TDSB'er). He attended my digital footprint session and ran his own with Zoe Branigan-Pipe. (Any pal of Zoe's is a pal of mine!) I was only able to catch a few minutes of his talk because I hate workshop-hopping and didn't want to interrupt the flow. Royan is also an enthusiastic learning and bon-diggity dancer - at the ECOO Playground, he used Just Dance for the first time and was amazing. I look forward to honing my understanding of digital identity through his work.

For some reason, Brian's data in my mind is filed under "Chris". He attended my digital footprint session and made some great points during the discussion.  Brian is also one of the funniest guys I've met. He had me cracking up with his zinger tweets during the #ecoofaceoff - I still can't believe that he does not yet have a permanent contract with his board. He's a board game fan who has already given me some great tips on new games to get.

David is a fellow Toronto District School Board employee - in fact, his school is located in the neighbouring FoS to mine. In a "6 Degrees of Separation" moment, I found out that he works at the TDSB school where Royan used to work. David is very knowledgeable about web design and has become even more so. He taught me about adding a Twitter button to my school site, CSS and all sorts of stuff that may have gone over my head at the time but will sink in if I keep reading and playing with it.

I had dinner with Sari and Brian at a Korean BBQ place. I've never had Korean BBQ before. Sari and Brian taught me how to do it safely (no picking up cooked meat with the tongs for raw meat) and while we ate, we had great conversation about teaching. Her job description is fascinating and I'd love to share teaching notes in the near future.

Have you ever recognized someone but been unable to pinpoint exactly how you know them? Cindy seemed very familiar and we deduced that we must have met at a past conference. Cindy ran the Xbox Kinect Just Dance station during the ECOO Playground and as I waited for my turn, we chatted about all sorts of things. Now that I have her Twitter ID, it'll be easier to stay in touch and keep the conversation flowing.  (And so it returns to the wet allusions - a suitable end to this post!)

Posted by MZMollyTL at 5:50 PM