This was a very busy weekend for me. My god-daughter's brother had his First Communion, I visited my mother for Mother's Day, and I attended the Toronto Comic Arts Festival. This experience was unique because I brought four of my students to the Librarian and Educators Day. They will be making their own blog posts on what they saw and learned on our private intermediate division wiki - I hope they'll give me permission to share their thoughts here as well. 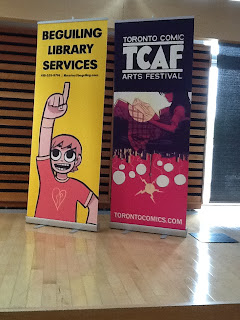 Raina (creator of Smile and Drama) and Dave (creator of Astronaut Academy and TeenBoat) talked about the misconceptions people have about comics, their experiences in the comics industry, and comic heroes (not the caped kinds - the organizations and individuals promoting and supporting comics for kids).

My $0.02 = Raina and Dave are two of the nicest, most approachable kid comic creators in the business. I was pleased to hear about Kids Comics Revolution, a podcast Dave and Jerzy Drozd have established. They've also launched the KCR! Comics Awards, a readers choice award for Canadian and American young people - they vote for their favourite kids comics! (This fits nicely with my research on readers choice awards.)

This panel, consisting of moderator Robin Brenner, Gene Ambaum, Eva Volin, Rebecca Scoble, Charles Brownstein, and Diana Maliszewski, discussed "content concerns and challenges, and ways for advocating for the inclusion of comics in collections and curricula" (according to the TCAF website).

My $0.02 = We had some interesting conversation during this panel. Jamie Coville, a diligent and hard-working gentleman who records panels like this for www.TheComicBooks.com/audio.html, took the time to record this talk for the website. I'll post the link here so you can hear the discussion. It's interesting to hear from the audience - for example, one person had problems getting her most advanced readers to accept comics at her high school, while another had the exact opposite problem. Another person wanted to include American Born Chinese on their high school media course reading list and was having opposition, yet another educator in the group was using it without complaint in a Grade 7-8 class.

Bill Amend is the creator of the syndicated comic Foxtrot. Raina interviewed him.

My $0.02 = Bill has a very unusual background for a cartoonist - a degree in physics. He incorporates math and science (as well as popular culture references that he enjoys, such as D&D and Star Wars) into his comics, so much so that textbooks often use his strips. It is challenging to do comic strips that appear in newspapers because the comic must be safe enough for children and seniors to consume but still be funny and edgy. It took two years for Foxtrot to be accepted (it was one little note at the end of one of his rejection letters, saying "we like your art, writing, and humour - just tinker with the subject matter) that led him to ditch his original concept of a science studying animals in a jungle and persevere. He said that readers are not his only customers (the newspapers that choose to run his strip are as well) and he has to work hard to keep both happy. He told some great stories about meeting Bruce Springsteen, Bill Waterson (Calvin & Hobbes) and George Lucas. This was a great talk for media literacy - understanding audience, creating a product, making decisions - I think I can bring some of these ideas (as well as Bill's new kid anthology of Foxtrot, which I bought) into the class.

Using Children's Graphic Novels with Confidence - Build a Collection and Put Them to Use!

Scott Robins, author of A Parent's Guide to the Best Kids Comics, shared a short history of comics, the evolution of acceptability, and ways to evaluate comics.

My $0.02 = Scott knows comics well - he's one of the bloggers for School Library Journal on comics and his book is very helpful. (Bias note: he's also a friend of mine.) We couldn't stay as long as I would have liked to remain, because the afternoon sessions started late and I had to get our students back to school on time. I took several screen shots of his Powerpoint slides, because even though I already feel pretty confident about my comic collection in my school library, there's always something new to learn! 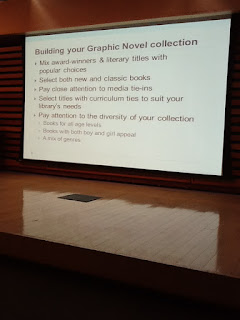 As is often the case, I learn just as much from the in-between conversations as I do from the official sessions. It was great to talk to Leslie, Scott, and Sasha. It was informative to buy new books for our collection. It was helpful to expose my students to a very different learning method (for them, I think they liked choosing their topic of interest to attend, but I think the format felt very long for them and it took courage and encouragement to quietly excuse themselves when they needed to stretch). I also learned that Toronto Reference Librarians are strict - I went to take a picture of my students in one of the futuristic study pods and was scolded sternly - taking photos in the library violated user privacy. I was inspired enough by Friday to make my own comic on the back of a kids place mat while at dinner with my family.

This was actually a panel I attended with my daughter on Saturday. We went together, had a "spirit animal sketch" done by Brian McLauglin (I'll check the spelling later), bought books and had them signed by Svetlana Cmothzky (I'll definitely check the spelling of that later), and then heard this talk. It was also very informative (I'll copy and paste the TCAF official description below.) It was a great TCAF experience, and I hope more people (especially those not particularly familiar with comics) will attend.

Fashion in Comics! This program opens up a conversation about the importance of fashion in comics. What are fashion’s influences on a creator’s work, and conversely, comics’ influence on fans and real life fashion? What approaches and research does one go through to depict specific fashions? Is comic book fashion good? Join moderator Krystle Tabujara in a spirited discussion with Fashion Journalist Nathalie Atkinson (The National Post), Willow Dawson (No Girls Allowed), Kagan McLeod (Fashion Illustrator, Infinite Kung Fu) Bryan Lee O’Malley (Scott Pilgrim), Ramon Perez (Wolverine & The X-Men), and Maurice Vellekoop (fashion illustrator, TCAF Featured Guest).
Posted by MZMollyTL at 12:30 AM