Fearful but I Finished! #MADPD and Hemming

A lot of my learning this week happened during the weekend. On Sunday, I participated in #MADPD - where educators share what "Makes A Difference" in their classrooms and schools.

I mentioned in a previous blog post, https://mondaymollymusings.blogspot.ca/2018/04/get-ready-get-set-present.html, that this would be a departure from my regular presentation mode. When I've done webinars in the past for OTF (the Ontario Teachers Federation) or TVO (Teach Ontario), I've had others standing ready in the background to make it a smooth experience. Even though #MADPD is not affiliated with an official organization, there were many emails with technical tips and reminders in preparation for "D-Day" (or is that "PD-Day"?). I touched base with Jennifer Casa-Todd via Twitter DM for any last-minute suggestions, checked that the tech was ready to roll, and even made sure the basement background, my hair, makeup, and nails were just right. I took this photo a few minutes before I was scheduled to start. 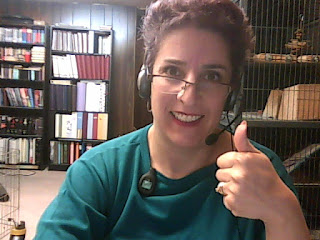 When it was time for me to present at noon, I could not locate the "start broadcast" button on my channel page. Yikes! Thankfully, Jennifer was still in touch and I could see her messages on my cell phone next to me. I started a new live broadcast and delivered the presentation, only a few minutes behind schedule. I even had two live viewers during the actual broadcast: Stephen Hurley from VoicEd Radio, and my daughter Mary (who was checking to make sure everything went well). I was so grateful for Jennifer's advice and heads-up - it meant I was aware of the lag in sound and to monitor the YouTube chat link. Here's a copy of the archived #MADPD session I did

After it was done, my teeth ached! I think it was because my jaw was clenched with tension. I was really nervous, and frankly, a little frightened that it would bomb spectacularly. It didn't, and it wouldn't have been the end of the world if it did, but I'm relieved that it worked. After all, Doug Peterson and Stephen Hurley talk almost fondly of the time they tried to do a broadcast of VoicEd Radio live at the Bring IT Together conference, and the recording failed - they call it the "lost recording". It was nice to have a live audience for our #MADPD talks, but Carol Salva, a #MADPD participant from this year and last year, told us:

OK!  So *IF* you have tech issues and your session does not work out, NO STRESS!  We have had a few like that and I am speaking from experience here.  Do what I did last year.  Keep trouble shooting and then if all else fails you can always re-record your session on  your own.  Give Derek/Peter the new watch link & also Jennifer for the Master schedule.
That way, your updated/fixed video will be viewable in replay.  Today is exciting but really, most of the views happen in replay over time.  I had 2 live viewers last year but over 100 in replay.

Well played sir! Well played! People can have a #MADPD binge watch marathon afterwards but I applaud your excellent use of social media to gather your live audience! I'm sorry I'll have to wait to see yours! pic.twitter.com/cz4eLIg2lf
— Diana Maliszewski (@MzMollyTL) May 6, 2018

We don't always talk about how trying new things in education can actually be a bit scary. (The original title for this blog post was Scared but Successful - but I already used the word success in last week's post!) The day before, I finished a project that I was really terrified that I'd mess up. I've been taking sewing lessons and my latest task was to hem my daughter's prom dress. My daughter bought her own dress with money she saved, and although it was not ridiculously expensive, it was costly enough that I did not want to make a huge mistake that would involve buying another one to replace the dress if I damaged it beyond repair. Last week, my sewing instructor showed me how to get the proper length, pin it, iron it to show the new goal length, chalk an inch for the inside hem, and then cut it. I was so scared to take a scissors to the dress, but I did. This week, I stitched the cut ends so it wouldn't fray, folded it and sewed the hem. It worked! 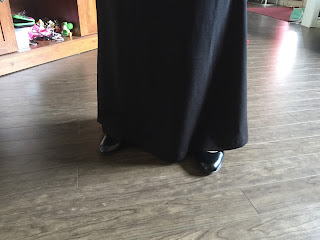 I think it's important to try things that aren't guaranteed to work, and that actually might fill you with trepidation. It definitely makes me more empathetic to students when they have to try new things. On Friday, May 4, I escorted our First Lego League Junior team to their event. I think they were nervous about speaking to the project reviewers, but like me and my projects, they survived and thrived! 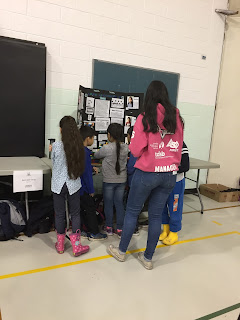 So here's to trying things that make you anxious and here's to friends and supporters (Jennifer, Derek, Peter, my sewing teacher Natalie and classmates Mumtaz, Marcia, Angelina) who make attempting these things a little less frightening.

Posted by MZMollyTL at 3:00 AM