My default answer to questions of how I am is pretty consistent this month: tired. With five trips planned in the next two and a half weeks, plus the yearbook deadline looming and other school-wide events, it feels very busy and my energy is lagging.

I've had to get a bit creative in arranging prep coverage for my days away. I took some unused partnering periods to provide some advanced prep pay back for one of our kindergarten classes. They received a double block of time. What could I do with the class that would be useful and productive?

One of the most popular items in my school library maker space are straws and connectors. Students love to build things, but most of the time, due to space restrictions and the large amount of mess it makes, I usually ask that structures get dismantled after the time is up. I'd been making a few exceptions lately, such as when another kindergarten class asked if they could keep their "library" up to play in the next day they were scheduled to visit. This led to a bit of class jealousy ("Why do THEY get to keep their building up?") as well as some class inspiration ("Can WE do that TOO?")

Since straws and connectors were going to be one of the stations available at our school's upcoming STEAM Family Night, we thought that it would be good to expose our youngest students a bit more to the possibilities. Another structure was already erect and so this class decided to try and make a building that was larger than the one that was currently standing.


We took three and a half periods to work on this project, and the ECE and I really noticed a evolution in the students' collaboration skills, problem solving, and communication. At first, the students were very self-centered. They went off by themselves or in pairs to do their making. One made a door but had nowhere to attach it. Another built part of the roof, but had nothing to stick it on top of to use it. The students started to connect their builds only once Mrs. Isidro and I encouraged them to join forces. They still didn't quite have a "big picture" yet, as they connected the straws up and somewhat willy-nilly. By the end of the first period of work, the structure fell down.

Mrs. Isidro and I wanted the students to do the thinking and building. Our role was to redirect and amplify student ideas. The second period was the same day in the afternoon. The students were keen to try again. One of the adults commented on how a cube built by a student seemed to be stronger and then the enthusiasm in the room increased and the language changed. One of them said, "It's more stable. We need a wider base." Then we started to see small groups making cubes and then adding those cubes to create a wall. We saw counting as students examined how long their structure was growing, compared to the one made by another group.

The third period was almost magical. The students could see the progress and they started to take on different roles. Some students decided that they needed to be the "fixers", and so they examined the structure to find where straws had come loose from the connectors and put them back together. This was a really important role, as it maintained the structural integrity of the bottom of the building. Others chose to make the structure taller, and then they had to brainstorm what to do when the structure rose above their heads. "We need a step stool!", someone yelled. Since there were no step stools to be found in the library, they used chairs to stand on. Still other students took it upon themselves to pass the builders more straws or more connectors, so they didn't have to get off their chairs. We started to run out of straws, so I cracked open another set of straws and connectors. This building used two and a half boxes of straws to complete.

Then there was the matter of the roof. Should we put a roof on? Will it fall in? How will we do it? In the end, we decided to leave it open, with a "sky light".

The pride in their accomplishment was evident. One little JK girl kept saying, over and over, with glee in her voice, "It's not broken!" We spent part of our last period together choosing which teachers we wanted to show the building to, and fetching them. My job was to watch the other teacher's class so the guest could go to the library to view the impressive build. It was 7 cubes across and 6 cubes high. The teachers they brought in were suitably impressed. They were able to enter the door (a big improvement over the 2 cube wide, 2 cube high door the boy working on his own two days prior had developed) and stand inside the building.

All good things come to an end. I had to be pretty sensitive about taking it down. Instead of involving the whole class, Thess and I chose a few students to come to the library before school ended on Friday to dismantle it. As I apologized for having to remove the structure, one of the SKs said, "That's okay. We can always rebuild it. And we can make it even bigger!" 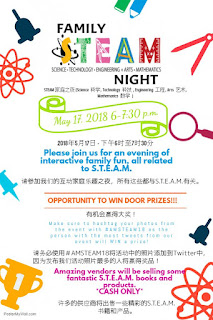 I hope this will encourage and inspire our students to come to our first ever school Family STEAM Night. It's being held on May 17, 2018 from 6:00 - 7:30 p.m. This event would not have been possible without our "STEAM Dream Team" of planners: Farah Wadia, Tina Voltsinis, Jennifer Balido-Cadavez, Hager Awara, Diana Hong, Ashley Clarke, and myself. We really worked well together. There will be stations that explore straws and connectors, squishy circuits, green screen technology, unplugged coding along with Scratch, Dash robots, and bird feeder construction with recycled materials. The bands will play, Mr. Roberts' Girls in STEM group will sell bath bombs and candles, and vendors like Elmwood Electronics and Ellaminnow will be there. It looks like it will be a lot of fun. Check the #amsteam18 hashtag on Twitter as well as the @agnesmacphailps Twitter account for photos of the event.