It was so busy this past week that I can't even fit my reflections into a single post! After returning home from the Teacher Learning and Leadership Program on Friday, May 9, 2014, I had just enough time to doze on the couch and go to bed so that I could be ready for the Toronto District School Board's Google Apps for Education Camp (TDSBGAFE) sponsored by the ICT department. Just like the event before, it first looked like it was all about the technology but it was more about the people connections.

TDSB GAFE - About the Tech

My goal was to learn at least one useful thing from each session I attended and I was successful.

What did I learn? = My big take-away was that I should use Tool > Research instead of Insert > Image because then you can get the citation information along with the image. Simple change, but brilliant!

What did I learn? = My big take-away was that I should search for the Google templates that are available and make copies for students to use, instead of doing all my own from scratch.

What did I learn? = My take-away was that the audience has tons of knowledge and we should always give a chance for members to express it. Also, people always want a bit of practical (e.g. "how do you make a blog?") along with the theoretical / inspirational.

Session 4 (2:30 - 3:30)
I was a bit late because of organizing the Google Demo Slam so I did something I almost never do at a conference - I session hopped.

Google Forms are Awesome Presented by Ray Mercer
= You can embed video in Google forms. Also, if you click the Add On section, you can get an Easy Bib creator for citations.

Using Google Apps Throughout the Inquriy Process by Julie Millan (Google Certified Teacher)
= While using the comment feature, if you type a + and the person's email, they will get an email notification of that comment (and you can send it to multiple people).

Using Google Docs in the writing process Presented by Francis Ngo
= While using the comment feature, if you type a + and the person's email, they will get an email notification of that comment (and you can send it to multiple people). (Yes, they shared the same idea - awesome!)

GAFE: Evolution of the Tool's Use in the Classroom Environment Presented by James MacLean-Taylor
= When you click File>Publish to Web, it will give you an embed code, so you can embed any Google document or presentation on your webpage.

How are GAFE being used in a Grade 3/4 classroom? by Diana Hong
= You can send a document to a few select students and have them share it with others, depending on their level of trust and responsibility.

TDSB GAFE - About the People 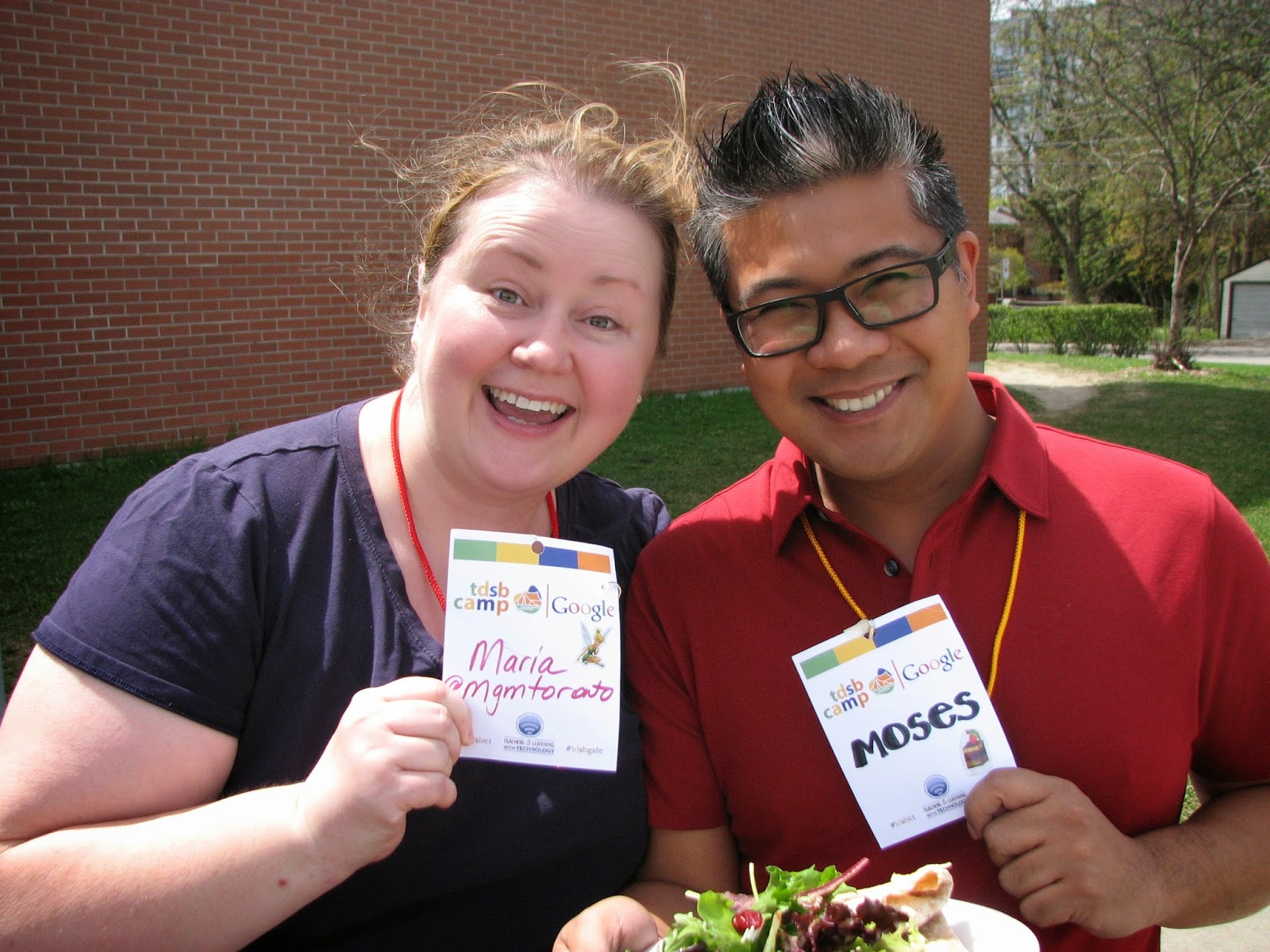 During lunch, I went to "talk business" with Moses Velascos and we ended up chatting with Maria, who knew us from Tribes. It was so nice to talk in the sun with two chipper people. Moses just joined Twitter, a great step to establishing his digital footprint. 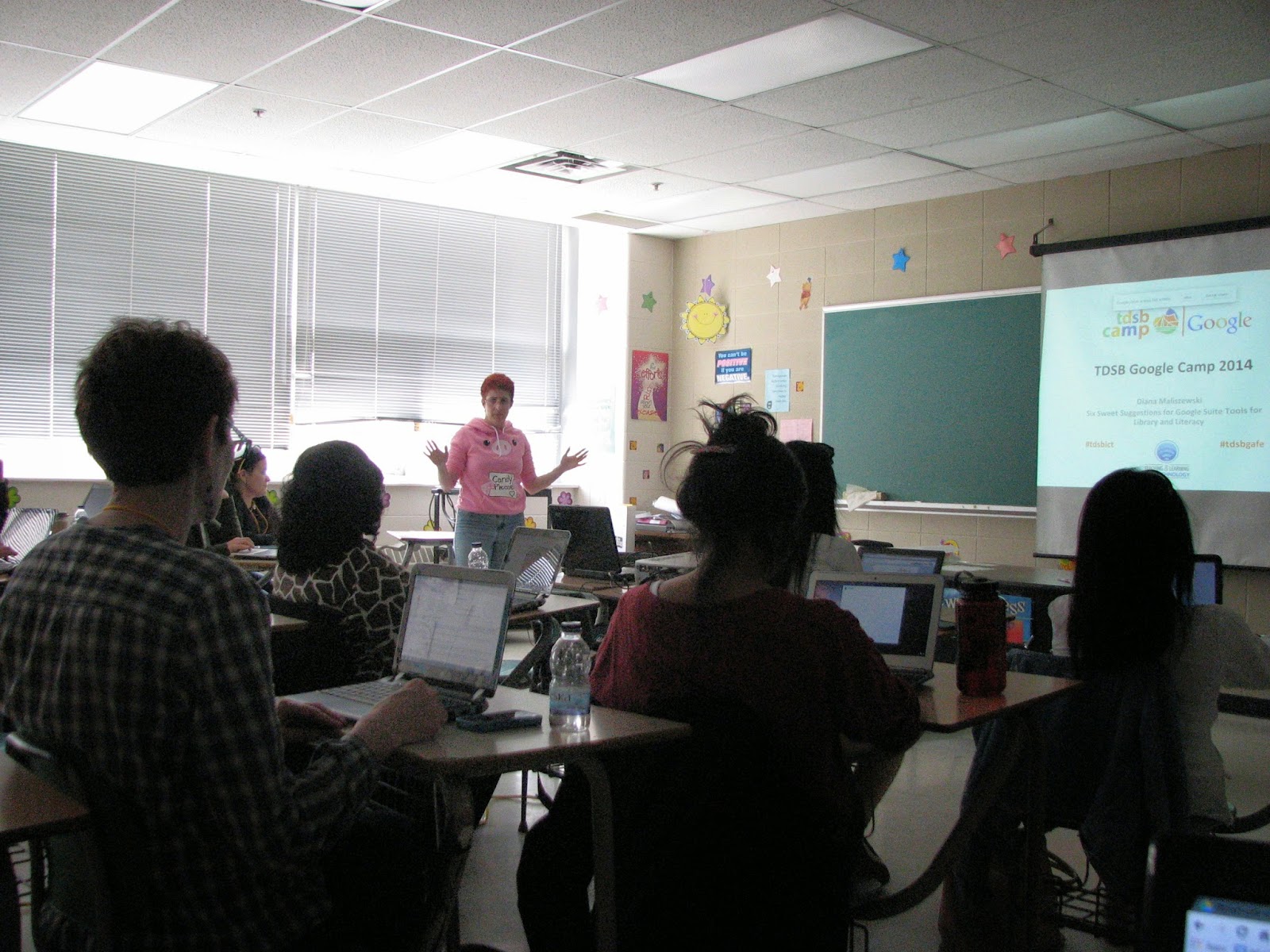 During Andrea's session, I sat on the floor next to Shelley Neal. Shelley is the teacher-librarian at the Holland Bloorview Kids Rehabilitation Centre. She is passionate about her students and her position and I was so taken by her enthusiasm that I'm arranging to visit her school so we can write an article for The Teaching Librarian magazine. (This is a photo of my session; Shelley is near the window but you can see the awesome Clare Gorman in the foreground.) 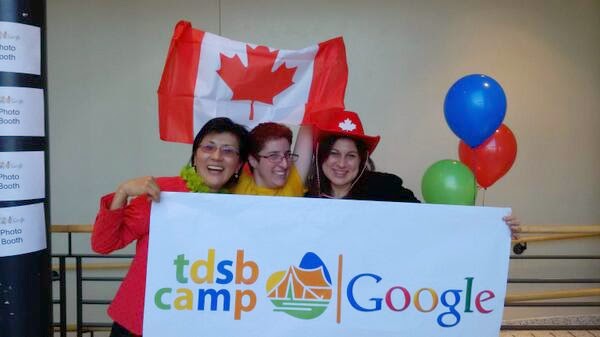 I worked the Photo Booth with Erich Shih early in the morning. It's amazing how willing people are to pick up props and pose just for fun. This is a photo of me and Annie Slater (and darn it, I've forgotten the name of the person to my left!) I recognized a lot of people as they entered the auditorium for the keynote. 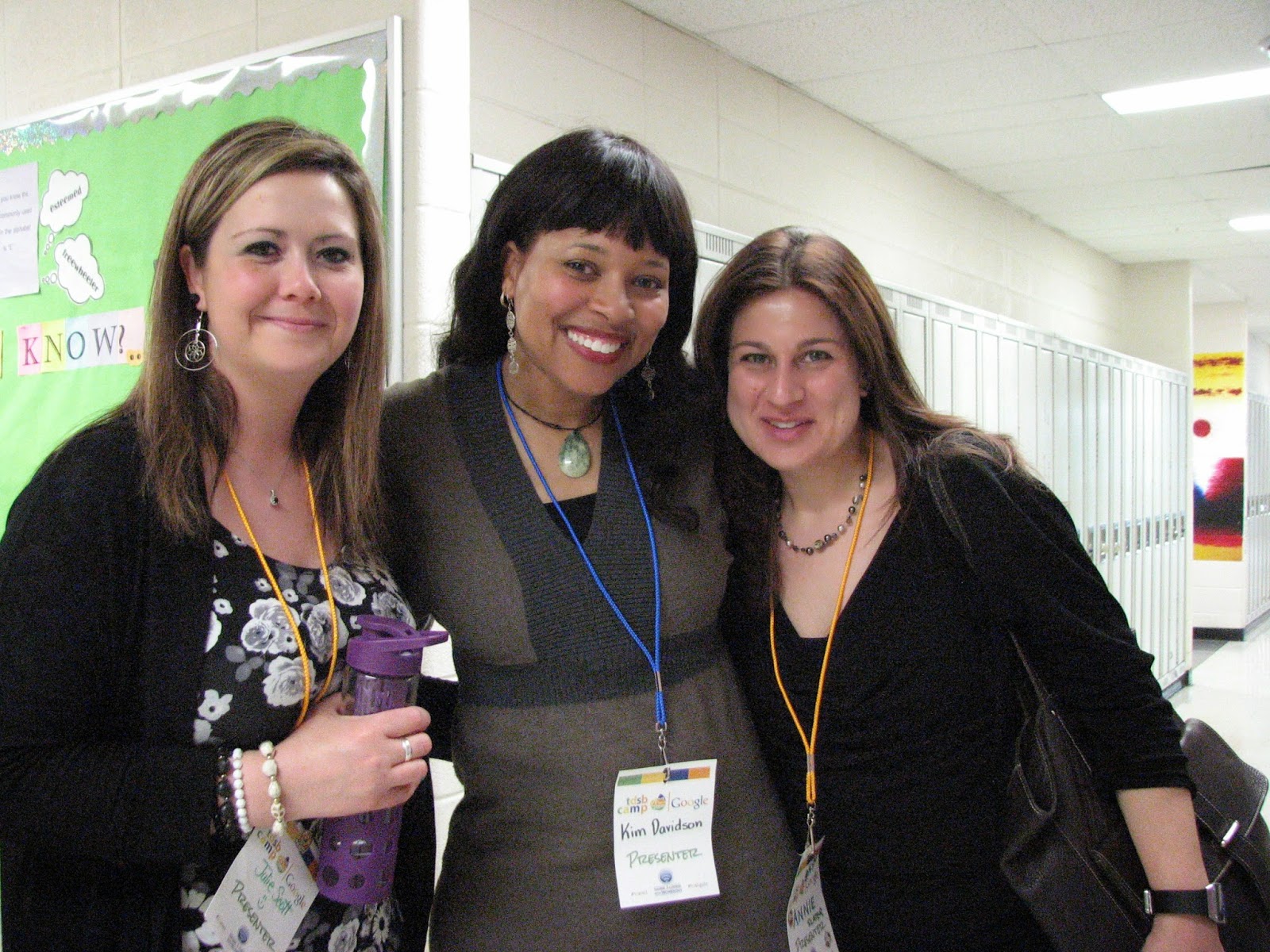 This was one of the most retweeted photos from #tdsbgafe (which trended on Twitter in Canada on Saturday) and you can see why - what appealing educators! Julie Scott, Kim Davidson, and Annie Slater chatted with me and Sybille Parry in the hallway between sessions and it was just as educational. (Special thanks to Sybille for offering her personal support to a new issue of mine.) 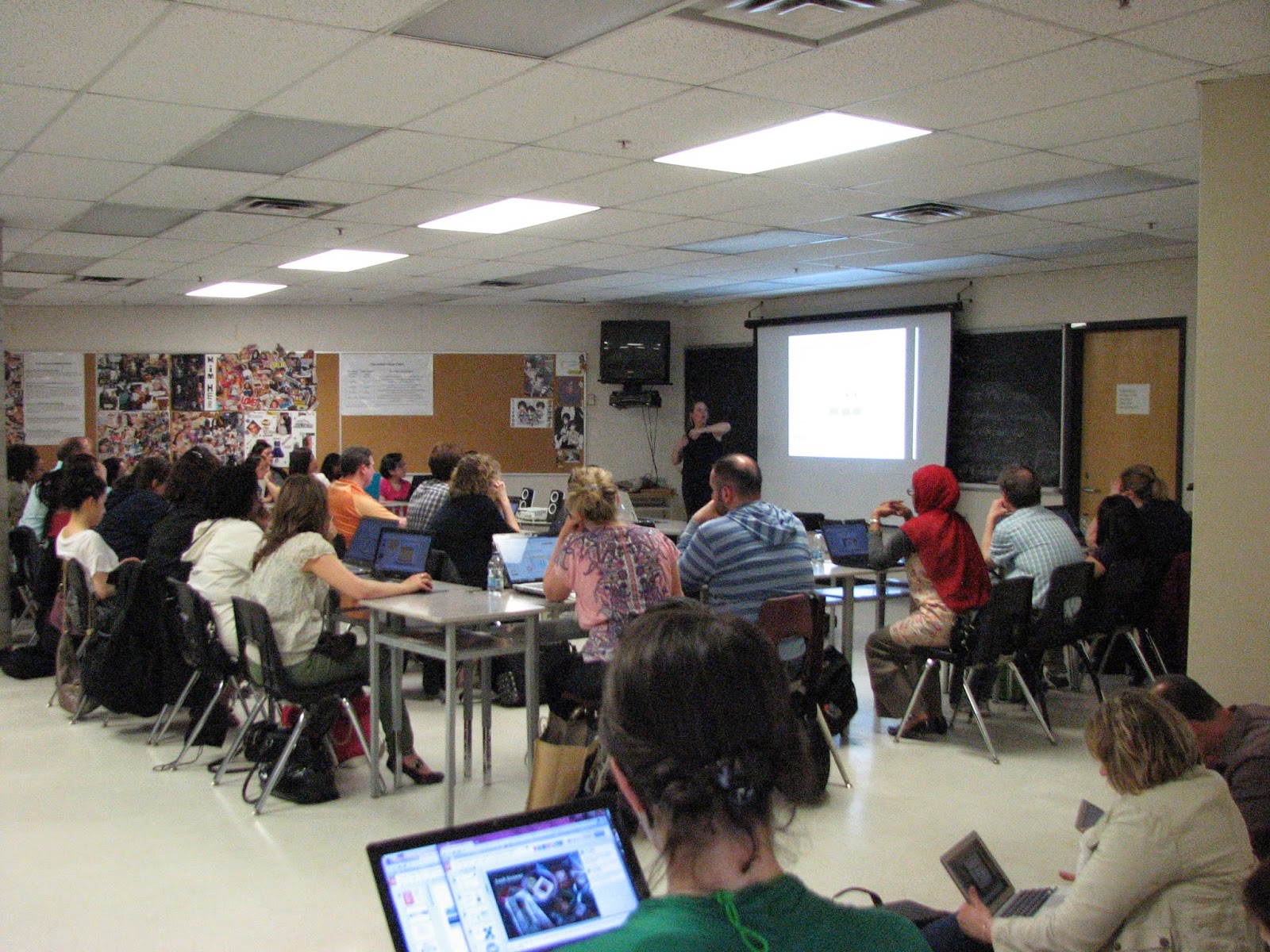 This was Julie Millan's room during one of her sessions: packed to the gills! Julie is a Google Certified teacher, a TDSB ICT IL, and a nice, nice person. It was her tap on the shoulder that got me to attend Google Camp in the first place (and volunteer at the Photo Booth, and participate in the Google Demo Slam at the end) and I suspect that this event would not have been possible without the many hours put in by Julie and her colleagues (like Andrew Schmitt, Kevin Bradbeer, Hugh Chamberlain, Lisa Weaver and others). 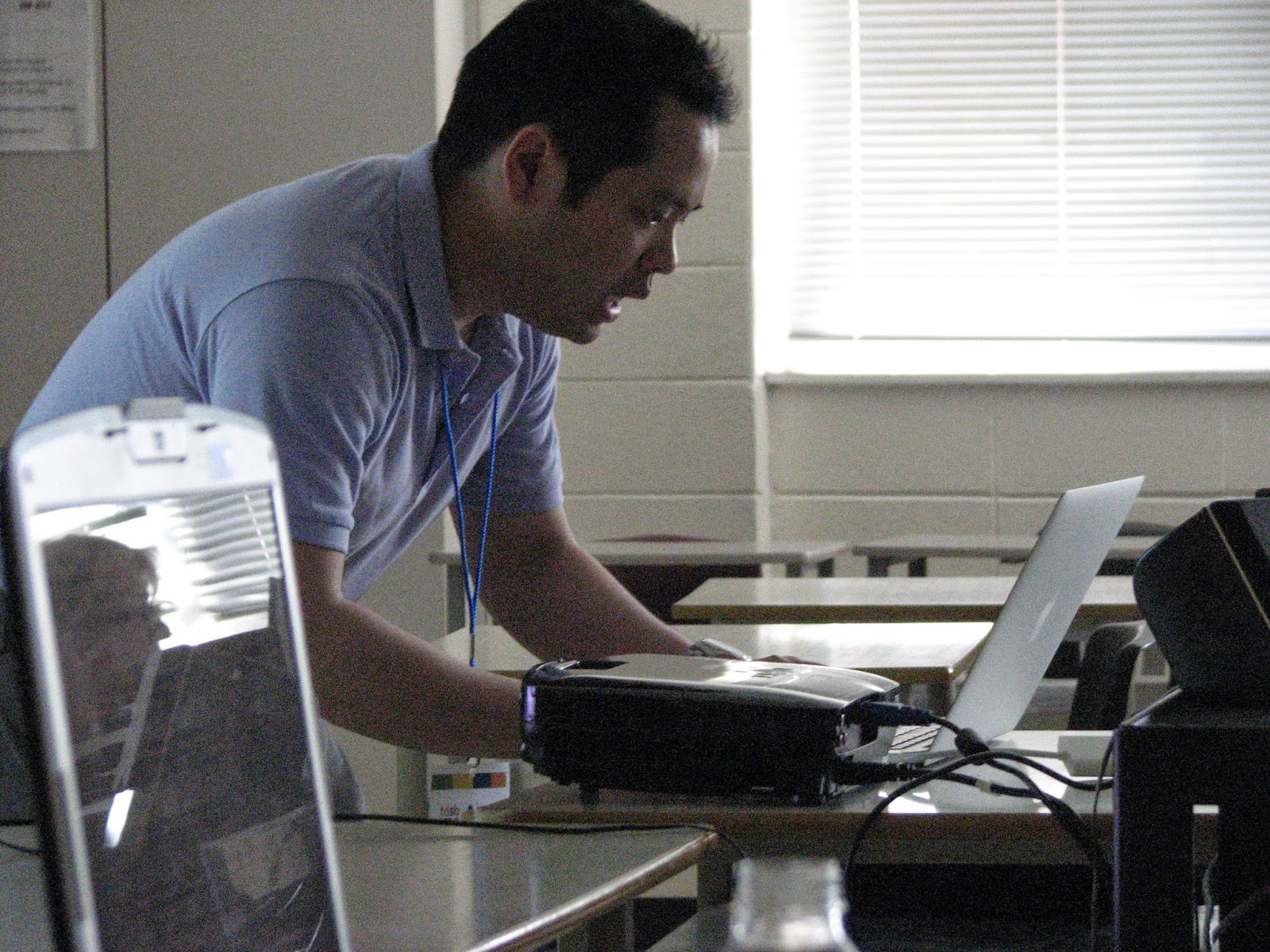 Four teachers from my school attended #tdsbgafe, (Dean Roberts, Diana Hong, Francis Ngo & I) and three of them were presenters. This is even more impressive when you realize that two of them are supposedly "new teachers" (as in, they've been employed by the board for three years or less). Here's my colleague, Francis, explaining how to use comments in a shared Google document. 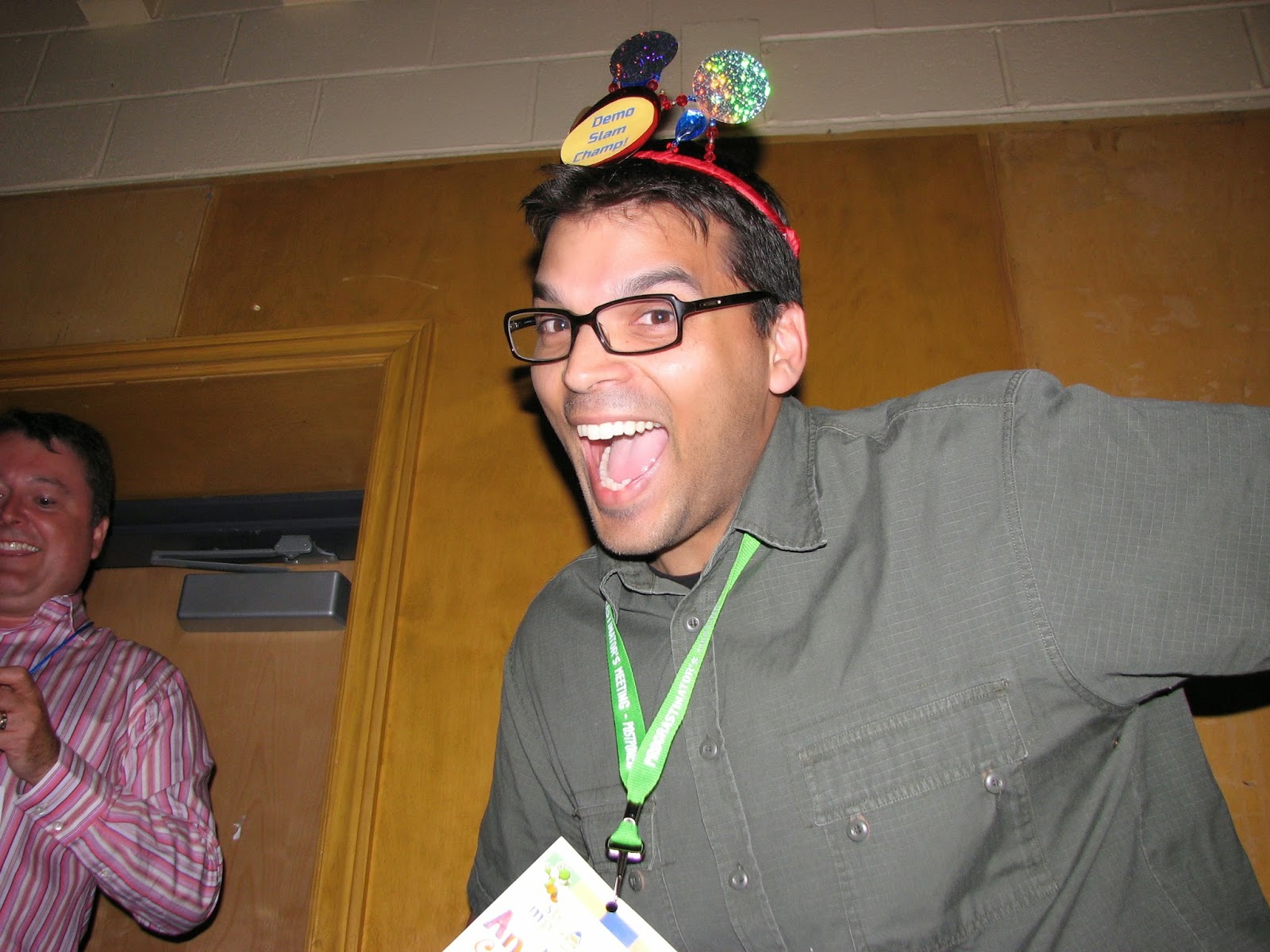 Heeeeere, he iiiiiiis. Miiiiister Ameeeeeeerica!
Okay, it's more like Andrew Schmitt, the winner of the TDSB Google Camp Demo Slam. It was really fun to see the different, quick-fire tips were shared by: Colin McCauley, Shelley Lowry, Kevin Bradbeer, Julie Millan, Andrew Schmitt, James Fulton, Sylvia Duckworth, (and yours truly). I nearly forgot a couple of names but someone clever took a photo of the Slam List - thanks!

This was a fun event, not because of the technology (after all, there's only so much Google love you can take in a day!) but because of the individuals involved. Big thanks to everyone involved.
Posted by MZMollyTL at 2:30 AM