Wednesday, February 13, 2019 was the TDSB Beginning Teachers Equity Conference at OISE. (The hashtag was #tdsbequityoise if you want to examine some of the tweets.) Friday, February 15, 2019, in addition to being a Parent-Teacher interview day, was also the second time the book club that I'm a part of met, to discuss chapters 3-4 of White Fragility, Why It's So Hard for White People to Talk About Racism. I really needed to attend both of these events. I still have so much to learn.

Microaggressions are the everyday verbal, nonverbal, and environmental slights, snubs, or insults, whether intentional or unintentional, which communicate hostile, derogatory, or negative messages to target persons based solely upon their marginalized group membership. 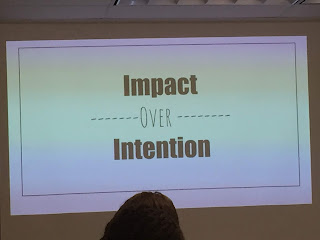 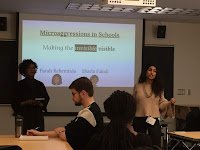 I was able to attend all of Sharla and Farah's talk (and only a few minutes of Gemsy and Deborah's talk, but that is available to listen to on VoicEd Radio via this link and their slides via the link mentioned in the tweet below). Farah and Sharla's talk was excellent. They had the participants go through and examine a variety of real-life examples to examine the intent and impact. They also shared a handout on potential responses when you experience a microaggression.Turns out what I needed was a handout on how to respond appropriately when you are the one perpetuating the microaggression.

A fabulous group of Beginning Teachers discussing student and educator experiences with microaggressions in @tdsb. What might the potential interpretations be? Sitting with voices from various identities, reflecting on impacts, & how to disrupt. @Farah_Rahemtula #TDSBequityOISE pic.twitter.com/XT1lAMWfVG
— Sharla Falodi 🗯 (@SharlaFalodi) February 13, 2019

Both Sharla/Farah and Deborah/Gemsy referred to this video, which is worth viewing multiple times.


As I alluded earlier, unfortunately, mixing up the presenters was not the only microaggression I made. I made a bigger one during my own presentation earlier. 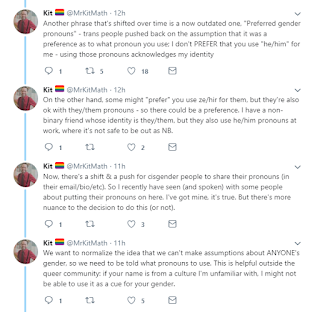 Before I detail my awful misstep, I want to thank @MrKitMath on Twitter, who helped educate me about the difference between "pronouns" and "preferred pronouns". People who are marginalized shouldn't have to do the heavy lifting and teaching (although they often do - I used Kit's quote about our obligations as educators as an image to end our slide deck). The correction made me more aware and now I've learned. I hope I can be as gracious when corrected as Alexandria Ocasio-Cortez, the American congresswoman who talked about her cis-privilege, and apologized for her use of the word "cis-genedered" instead of the more accurate "cis-gender". Her apology was not defensive and she promised to do better (and it seems like she has altered her words in subsequent tweets and interviews).


Because it makes “cisgender” a verb! It’s an adjective. (And the same applies to “transgender;” “transgendered” is incorrect.) “Verbing” the word implies that gender is an action that a person takes, effectively designating it a choice rather than a state of being.
— FC (@beewielder) February 2, 2019

I spoke about Anti-Oppression Opportunities for Media Literacy with Michelle Solomon. We named our privilege and tried to include as many identities and examples as possible. Somehow, we were able to finish with time to spare for questions and comments. Someone called us out on our choice of visuals and examples and said that we focused too much on the negative, and not enough on positive representations. I apologized. Michelle and I felt terrible about it afterwards. It's easy to get defensive and start to numerate the amount of positive examples we had included but weren't mentioned in the criticism, but we stopped ourselves. I know I asked myself why I didn't include the photos circulating Twitter right now of decorated doors that celebrate black hair and positive black representations. I do it in class (i.e. reading books about beautiful black hair like the book, Don't Touch My Hair,  I borrowed from amazing teacher-librarian Rabia Khokar as well as discussing the teen wrestler who was assaulted with scissors to his dreadlocks) so why didn't I do a better, balanced job then?


I was still thinking about my conference session on Friday when I attended my book club meeting. Thank you to the educators who are a part of that wonderful group that allowed me to bring up the incident and helped me to make sense of it within the context of the book we are studying. I won't go into further detail, but thanks again Ken, Courtney, Ruth, Leslie, and Josephine. Mistakes are part of learning.

The conference in between those two workshops (mine at 10:30 am and the one on microaggressions at 2:00 pm) was still full of learning, although maybe not as emotionally charged. Big thanks to my friend Tracey Davies, who carpooled with me and made the two-hour-long commute to OISE from Scarborough bearable. Tracey and I used to have such rich conversations when she drove us back from our Media AQ course a couple of years back and it was good to have the time to reconnect and share our thoughts while on the road. Thanks also to Ashley Clarke, who accompanied Tracey and I back to the east end of the city after the conference was over. Ashley was an LTO at our school last year; (I wrote about her on this blog previously) she is a permanent teacher elsewhere now but both the students and I miss her immensely. Thanks to Alicia and Casey for their excellent talk on anti-bias education in the early years, and to Jennifer Watt for organizing such a great conference. Also thanks to the people I had the pleasure of chatting with at lunch, an informal way to keep the learning going: Rizwan, Andrea, Iniyal, and a bunch of people whose names I've just forgotten (one of whom just won a prestigious award - how have I forgotten?).

I'm writing about my humiliation publicly not to collect any "poor-me-points" but rather to illustrate that there are going to be awkward and uncomfortable moments when doing equity and anti-bias work. It doesn't mean we should stop trying to be better, but we need to understand how the fog of the implicit bias we live and experience shapes us in ways we are unaware and think, reflect, read more, listen more and continue to try.

Posted by MZMollyTL at 3:00 AM